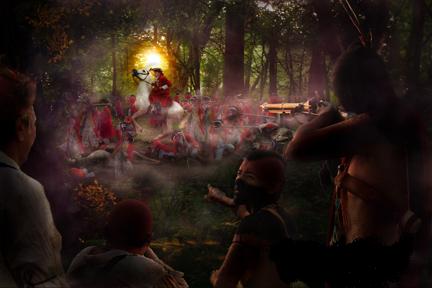 One might wonder why I've included a page on George Washington. My answer is that my research on that time period have led me to believe that God was truly at work in President Washington's life at numerous times in his distinguished career both during the French-Indian Wars & the Revolutionary War. Nothing short of miraculous is the explanation that I can give for how he survived in particular the Battle of the Monongahela River in July 1755. That expedition to Fort Duquesne was ambushed by French & Indian forces and after Gen. Braddock was killed Col. Washington helped in the command as one of the highest ranking officers though he was there only as a civilian guide and advisor to Braddock.

With several Indians shooting at him at point blank range and officers dying all around him Washington inexplicably survived the hailstorm of bullets for 2 hours to rally his surviving men and escape the slaughter- though his jacket had 4 bullet holes & 3 horses were shot out from under him(80 years later a gold seal was found on the field of battle bearing his initials that had been shot off his body). Though a young man his reputation quickly grew in the colonies and among many he was called "The American Achilles" as the general feeling was God had protected him during that slaughter and it was obvious to at least the Indians who fought him that no mortal could kill him.

Many years later Washington met the Indian Chief who had been personally attacking him who said ""I am a chief, and ruler over my tribes. My influence extends to the waters of the great lakes, and to the far blue mountains. I have traveled a long and weary path, that I might see the young warrior (George Washington, from the day he had horses shot out from underneath him) of the Great Battle. It was on the day when the white man's blood mixed with the streams of our forest, that I first beheld this chief. I called to my young men and said, mark yon tall and daring warrior? He is not of the redcoat tribe  he hath an Indian's wisdom, and his warriors fight as we do  himself is alone exposed. Quick, let your aim be certain, and he dies. Our rifles were leveled, rifles which, but for him, knew not how to miss - 'twas all in vain, a power mightier far than we, shielded him from harm. He cannot die in battle. I am old, and soon shall be gathered to the great council fire of my fathers in the land of shades, but ere I go, there is something bids me speak in the voice of prophecy. Listen! The Great Spirit protects that man, and guides his destinies  he will become the chief of nations, and a people yet unborn will hail him as the founder of a mighty empire."'"

Another telling of the story- Foolishness! the Indian chief exclaimed, as he gazed scornfully across the battlefield. From their hiding places the French and Indian warriors could see the British soldiers dressed in their bright red uniforms, shoulder to shoulder; 1500 men marching down the forest road to their death, like a grove of small trees waiting to be chopped to the ground. The British were trained for European battle and stood little chance against the French and Indian guerilla warfare. Fully exposed atop their horses, British officers attempted to hold their men in formation even as the Indian warriors shot them one by one. The slaughter ensued for two hours. Quick! Let your aim be certain, and he dies! the chief commanded. The warriors leveled their rifles at Washingtonround after round, bullet after bullet; smoke filled the forest. Twice his horse was shot from beneath him. As horses were left by the death of fellow officers, he mounted them and continued to crisscross the battlefield carrying orders to the soldiers. More rounds fired, the sharpshooters taking one life after another. Nearly 1000 young men were killed, and still, Lieutenant Colonel Washington remained. The native warriors stared in disbelief. Their rifles seldom missed their mark. Stop firing! the Chief commanded. This one is under special protection of the Great Spirit. Another Indian warrior added, I had seventeen clear shots at this man . . . and after all, could not bring him to the ground. This man was not born to be killed by the bullet. As the firing slowed, Washington gathered the remaining troops and retreated to safety. That evening, he noticed an odd tear in his coat. It was a bullet hole! He rolled up his sleeve and looked at his arm directly under the hole. There was no mark upon his skin. Amazed, he took off his coat to find three more holes where bullets had passed through the fabric, never piercing his skin. The life of George Washington had been miraculously spared.

George Washington's friend, Dr. James Craik, who was a witness of the battle said: "I expected every movement to see him fall. His duty and situation exposed him to every danger. "Nothing but the superintending care of Providence could have saved him from the fate of all around him."

There is a common misunderstanding about the faith of many of the founders that I believe has led some in particular to label them "Deists" rather than the true Christians that many were. Though many were reluctant to talk publicly of their faith one only has to see in particular Washington's prayers to see the depth of his understanding and conviction to Biblical Christianity and his deep and personal relationship to Christ. Here's a sample of one of his daily prayers from his own handwritten journal...

O most Glorious God, in Jesus Christ my merciful and loving father, I acknowledge and confess my guilt, in the weak and imperfect performance of the duties of this day. I have called on thee for pardon and forgiveness of sins, but so coldly and carelessly, that my prayers are become my sin and stand in need of pardon. I have heard thy holy word, but with such deadness of spirit that I have been an unprofitable and forgetful hearer, so that, O Lord, tho' I have done thy work, yet it hath been so negligently that I may rather expect a curse than a blessing from thee. But, O God, who art rich in mercy and plenteous in redemption, mark not, I beseech thee, what I have done amiss; remember that I am but dust, and remit my transgressions, negligences & ignorances, and cover them all with the absolute obedience of thy dear Son, that those sacrifices which I have offered may be accepted by thee, in and for the sacrifice of Jesus Christ offered upon the cross for me; for his sake, ease me of the burden of my sins, and give me grace that by the call of the Gospel I may rise from the slumber of sin into the newness of life. Let me live according to those holy rules which thou hast this day prescribed in thy holy word; make me to know what is acceptable in thy holy word; make me to know what is acceptable in thy sight, and therein to delight, open the eyes of my understanding, and help me thoroughly to examine myself concerning my knowledge, faith and repentance, increase my faith, and direct me to the true object Jesus Christ the way, the truth and the life, bless O Lord, all the people of this land, from the highest to the lowest, particularly those whom thou has appointed to rule over us in church & state. Continue thy goodness to me this night. These weak petitions I humbly implore thee to hear accept and and for the sake of thy Dear Son Jesus Christ our Lord, Amen.

In this cynical and true hero-less age where men like Washington are denigrated because of the shallow and hedonistic times we live in I find Washington a truly heroic figure. A man among men who's indomitable courage in battle & facing certain death, whose strength, endurance, faith, belief in the Republic were an example to all who struggled and suffered in the American cause. At a time when most were fleeing to safety & comfort and some turned traitor Washington stood fast and in my opinion was not only the Father of America but truly was the HEART of America. So much depended on him that I believe had he been killed or left command the cause would have most certainly been lost. When the American army was down to 2500 men before the battle of Trenton and days from it's complete dissolution in Christmas of' '76 Washington rallied the men & stormed the Hessian camp in a terrible ice storm where the only 2 American casualties were men who had frozen to death on the way to battle. Though Washington's men were deathly sick, marching on bare & bleeding feet, virtually unclothed except for maybe a tattered blanket, starving, exhausted, and broken in spirit after defeat after defeat in New York- Washington alone with almost superhuman will renewed their commitment and went on to achieve a truly miraculous victory over the best army on earth at the time- the German Hessian mercenaries encamped in the city of Trenton.

For seven long years of deprivation, untold suffering in winters & summers, financial disasters, political chaos, desperate battles, all were thrown at General Washington but though weary & exhausted he fought on to forge a brilliant victory at Yorktown that spelled the end of General Cornwallis & ultimately the War with Britain. Few men or women today can comprehend the price Washington paid to bring liberty & freedom to the colonies that became the greatest nation the world had ever seen.